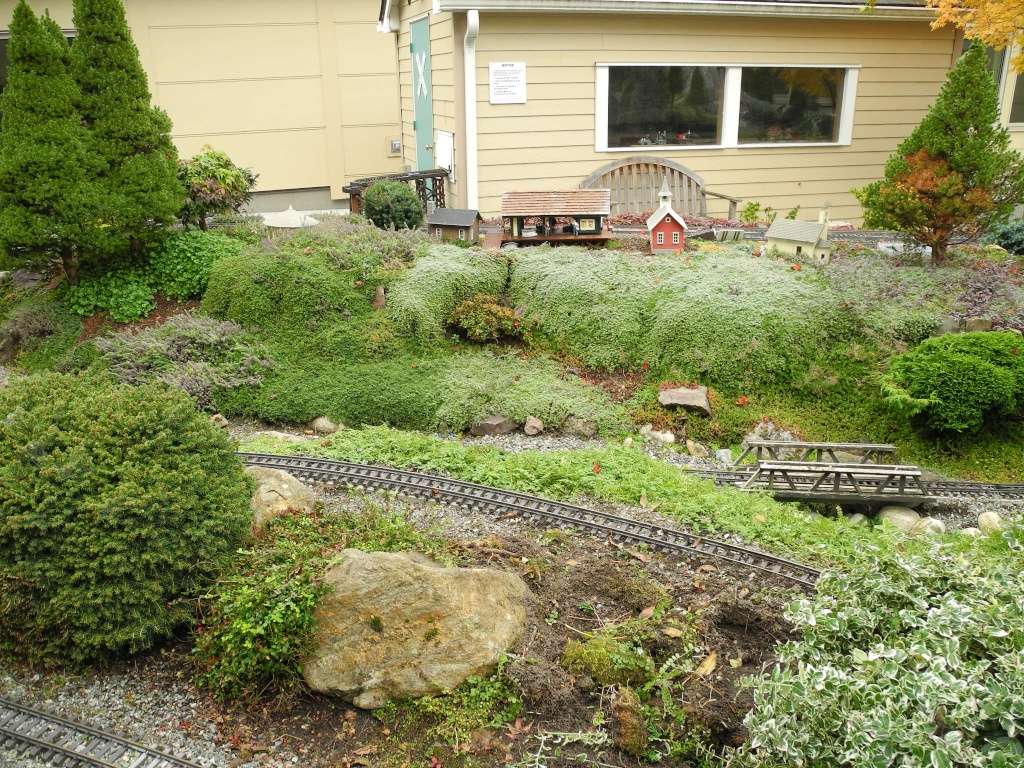 Yesterday we had the pleasure of visiting a railroad garden layout at Emerald Height Retirement Community. The layout was created 10 years ago from the founder of the Puget Sound Garden Railway Society who is still in the group today, and maintains the railroad part of the garden.  It has gone through several garden groups throughout the years and has evolved into a tribute to the city of Redmond, where the community resides. They spent about $10,000 installing the courtyard garden at the direction of Jim (I forgot to get permission to publish his full name!) and the garden is visible on all sides from inside the building as well. Quite the feat. Quite the layout!

We were invited to give them some recommendations for the miniature garden. This was an honor considering I used to look at to their hobby for inspiration and always called garden railroading the grandfather of miniature gardening. Here are some photos of the layout and I’ve included some of the ideas that I shared with them and some ideas that come later, when writing this post.

The main thing that stood out was the lack of trees, shrubs and “garden beds.” Thankfully, I brought a few of our own plants to help illustrate how nicely our beloved dwarf and miniature conifers can be very low maintenance, while still appearing like a “full-sized” garden tree in miniature. I loved the “big” clumps of ferns in the back right that looked like Pampas Grass, but there needed to be some garden design to help situate the buildings and make them look like they belong there. A tree on the back corner of the church, a small driveway (or parking lot?) and a path going to the stairs would help create the permanence and age for the church.

The main challenge for any of us is getting into the miniature garden to do the maintenance: trimming, weeding, thinning and grooming of the plants and trees. Using the rectangular pavers as the road gives you a spot to place a garden kneeler – or to sit on the kneeler – comfortably while puttering and weeding.

See how the ground cover looks natural coming out of the crevices of the “sidewalk.” It will happen naturally with time, but you can speed up the process by tucking small rooted plants into the cracks in the fall, and let them establish over the winter. If done in spring, the small plant-start is not going to be established enough to tolerate the hot, summer sun because the roots haven’t grown into the new soil underneath the pavers. Different plants to use for this idea are Corsican Mint, Elfin Thyme and Baby Tears (Baby Tears can be invasive in some areas.) Mist daily if the weather is dry to help them along.

The big patch of ground cover Stonecrop Sedum (Sedum spurium) in the foreground may look a bit more realistic if there were more “boulders” or rocks, some fallen logs and /or tree stumps to help remind viewers of the scale and make it look like a “back-forty” acre of land. Capture the scene with an old rusted, broken-down tractor nestled beside one of the boulders.

Above, that tightly pruned plant on the hill behind the station is Fairy Vine (Mulenbeckia complexa.) The gardeners prune it tightly and keep it in check because it can easily invade and spread. If they pruned it back even further to expose the rocks, and placed some smaller matching rocks placed at the bottom of the hill, it would help bring the scale down to match the building and make the transition between hill and building more realistic.

The city of Redmond is known for its bicyclists (it’s where Microsoft lives) so they put in a bike trail along one side of the layout. I’m not coming up with a better way to keep the tiny bikes standing, but placing the bricks on the side would make a tighter trail about 3″ wide. This, however, would require digging up the existing trail, trenching it evenly (the ballast gravel in the trench may help level them,) and reburying them. A task that would take elbow grease and patience but, theoretically, it would only need to be done once.

During the conversation, Jim and I discussed the number of miniature garden plant options that has multiplied since he started the garden 10 years ago. The Streib’s Findling Cotoneaster was “the” stand-in for apple trees and orchards but the training it requires to trim it into a tree shape can get a bit meticulous, or better left for a bonsai artist. The Thyme-Leaf Cotoneaster, has since replaced the Streib’s Findling now that it can be found, and it has a better branching habit that looks more like a tree. The leaves are tinier too, flowers in the spring turn into berries in the summer that last through the winter.

Several vignettes throughout the railroad garden has its own set of challenges. This miniature vineyard requires pruning to keep the vines growing the right way. The choice of vine is a good one, the miniature version of the Hedera helix ivy is tough and can handle the judicious pruning. (Also called Ducksfoot Ivy because of the leaf shape.) However, this scene gets a bit cluttered with the coarse bark mulch. Perhaps replacing the bark mulch with mushroom compost, or another type of fine mulch, would help define the rows of vines and let the workers and vines stand out.

You can begin to appreciate all the work that has gone into this layout over the years. At times it must be fairly daunting not to mention never-ending. It is understandable how the details that we bring to regularly to miniature gardening can easily be ignored with such a big miniature scene. Something as simple as adding a road to this miniature town of Issaquah can be a complicated installation, navigating the train tracks, climbing up and down multiple times to build it into the scene.

So, as miniature gardeners, we’ll take the garden, leave the trains at the station, focus on the plants and create smaller, manageable mini gardens to our heart’s content quickly, easily and for a fraction of the cost.

See our fun miniature garden plants, accessories, kits and more up in our store here. Check back often, our inventory is always changing!

Like this? Then you’ll love our Mini Garden Gazette. Join us here.