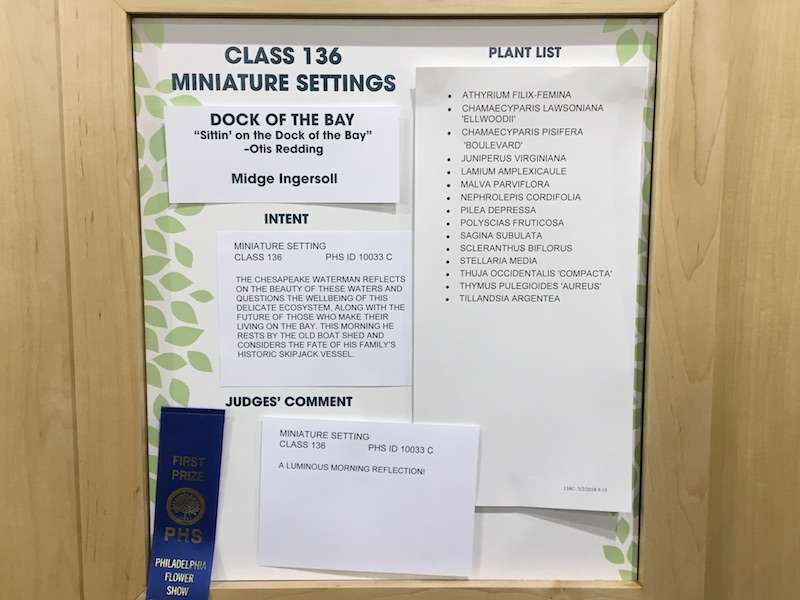 Here are the Miniature Settings from this year’s Philadelphia Flower Show in case you missed it. You can probably tell my ‘Best of Show’ by the number of photos below – it was Nancy Grube’s ‘The Old Mill Stream,’ which certainly checked all my boxes. Deb and Jim Mackie’s display, ‘The Call of the Siren,’ was stunning as usual. I imagine she made the mermaid and the horse, and her seascape was delightfully awesome. Midge Ingersoll’s ‘Dock of the Bay’ is up there in my books as well. She did a fantastic job including a boat, dock, shed and garden all in one tiny scene. But, all-in-all, it was Nancy’s trees and garden that did it for me in ‘The Old Mill Stream.’

See all the exhibits below. I won’t do any individual comments as the bulk of this exhibit wasn’t very impressive compared to previous years. You can compare them too, here are the exhibits from 2014 here, and here – and 2015 is here.

What Does the Best of the Best Mean?

My question remains how the other types of exhibits within the huge Philadelphia Flower Show seem to attract high-quality work, but this Miniature Settings exhibit does not. It’s first-come-first-serve to participate, which is apparently how the rest of the show’s exhibits operate, but where is the quality and the expertise? See the comparison from 2014 here, and here – and 2015 is here.

I also realize that it may not easy as it may seem. There was at least one other IGMA-level miniaturist in this group besides Deb Mackie – or at least I thought so – but it doesn’t show and leaves us wanting for more. (IGMA.org)

They built new cases for this year’s show that were lighter in color – apparently the miniature details show better when the frames are darker, so I’m not sure how that detail was missed. They were hard to view with the glare on the windows too. And forget about trying to get a good photo without the glare – it was impossible to figure out with a long line-up of people behind you waiting for you to move along…

I think I’ve posted all the entries in the order these exhibits were presented at the show. You can see the name of the exhibitor, the judge’s comments, the ribbons that were handed out to every exhibit as well as the plant lists. Everyone who didn’t win, got an Honorable Mention ribbon! Lol!

I was initially under the impression that the chosen award for best of show this year was because it was made by a middle school garden club – but the judging is supposedly done blind. (Judging blind means they don’t see the name of the artist when they judge it.) So, that blew that theory… You can see the big purple ribbon on it in the photos below.

Note that this is very different from our miniature gardening and should not be confused with one another. Here’s more on the difference. Most of the plants they use in their displays are tender tropicals, very young perennials or both – with some conifers included for structure.

Let me know what YOU think in the comments below. What’s your best of show? What do you think compared to the previous year’s that I linked above? (Any name-calling or overly negative comments will be edited or deleted altogether – this Mini Garden Guru blog is beholden to no sponsor, no club nor any other company but my own.)