Fairy Gardening: A Dying Trend Grows Into A New Adventure 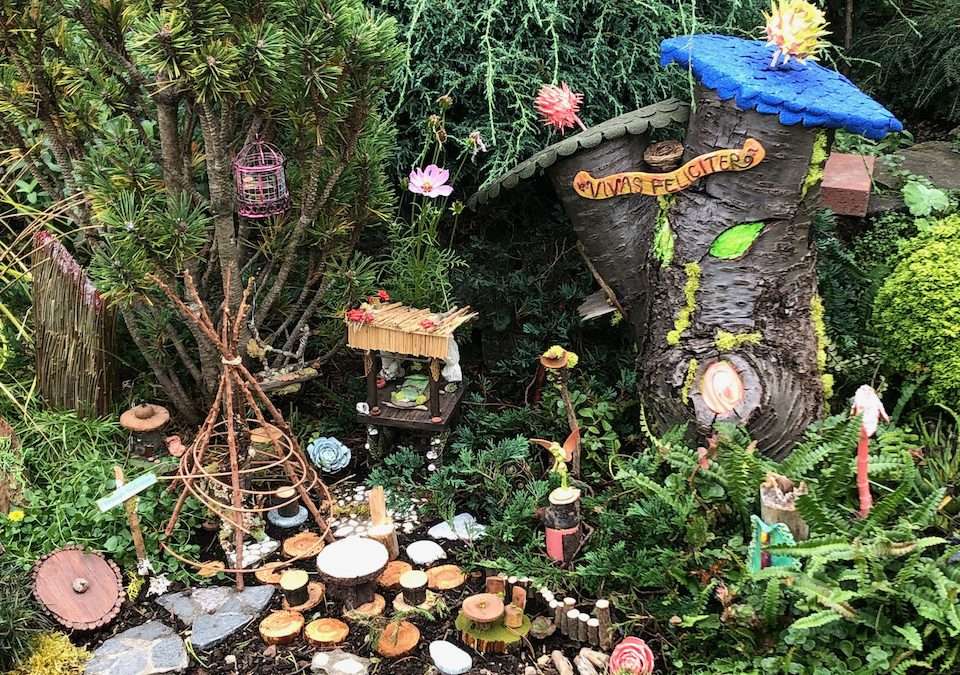 The fairy garden trend is dead. Now before you go getting on your unicorn and shooting fairy blow darts at me, let me put this in a bit of context.

Hint: It never was a trend.

We know the “trend” has ended because we are no longer seeing the huge displays of fairy garden houses and accessories in every local garden center, the big box stores, nor any of our craft stores. The one company that help build it for years and years before the official trend, Plow & Hearth, are no longer making any fairy accessories or many houses anymore. (From working with them through my two book launches, fairy gardening was a major theme for this huge retail chain based on the east coast.) All that is left are smaller, online fairy stores offering a variety of fantasy accessories and fairy-whatnot.

So, this tells me the trend is dead, BUT what the-powers-that-be-whomever-they-are never understood is, fairy gardeners were never simply following any trend – they are indeed die-hard fairy gardeners. They aren’t going away because they never left. And that makes it a hobby, not a trend.

I too, Am Guilty as Charged

Now, before you reach for your pixie bow and thorned-arrow, I have to admit, I’m guilty of calling it a trend in order to get the gardening in miniature hobby at the top of the pile. I felt I had to throw some water on it, so to speak, because the two hobbies were seen as one in the eyes of those who don’t really pay much attention to us: the garden industry, the gift industry and the media.

There I said it.

For the miniature trees, shrubs and plants in the photos, please visit our online miniature garden center store, TwoGreenThumbs.com

Another thing that was totally overlooked by the-powers-that-be-whomever-they-are, AND all the folks who write books about fairy gardens: The fairy gardeners are adults.

The focus brought by the garden and gift industry to this “trend” was put on the accessories and houses for the kids to play with – not the plants, nor the garden, nor the adult fairy gardener looking for some level of sophistication for their hobby.

To be certain that you know exactly what a fairy needs, is equivalent to saying you know what goes through the mind of a fly.

And the focus of the fairy garden books was on the fairies, the lore, how to find them… which, in my humble opinion after studying this for a few years now – is really quite arbitrary which is another reason why I consider them children’s books. (The content, the amateur photos and the basic, basic projects are more reasons why these books can only be for kids.)

There is no solid evidence, only random choice and no concrete reason or system on how/why/where fairies live, but we do know fairies exist in almost every country’s history. So, to pretend that anyone knows exactly what a fairy needs is equivalent to saying you know what goes through the mind of a fly. It was up to the personal whim of the author, advising you to wear your clothing inside out to ward off evil spirits or make sure your fairies have a bicycle… (arg! they have wings! why do they need bicycles??)

I could go on but, my point is, what are we now left with?

A lot of disappointed fairy gardeners looking for some magic in their lives.

It’s Time for Us to Get in the Fairy Garden

So, it’s time to reintroduce it as a hobby.

And this is something that I’ve been working on for years, digging deep and figuring out what makes a fairy garden magical.

My first aim was to show the fairy enthusiasts how to get a real garden in their fairy garden, and how to grow a miniature garden worthy of any fairy.

But after decades of studying how to grow a garden in miniature, and finally learning to grow a successful in-ground fairy garden, and too many potted fairy gardens to count, I know for a fact that growing a garden for your fairies doesn’t have to be that hard.

It really just takes a bit practice to get tuned-into your plant’s needs to make it into a habit so it becomes part of your life. And it takes a bit of insight to get your fairy garden looking enchanting too.

Imagine coming home after a hard day’s work, decompressing while you check-in with your lil’ garden, say hello to your plants and fairies while pulling the odd weed or two, and up-righting an accessory that Squirrel found interesting earlier that day. Sounds like a great way to to unwind to me!

For the miniature trees, shrubs and plants in the photos, please visit our online miniature garden center store, TwoGreenThumbs.com

The End is a Chance to Begin Again

So join me in re-introducing the fairy garden hobby! I’ve been digging around in my own fairy garden, sifting through the Internet, researching the different fairy garden books available, seeing what other ‘experts’ are doing – and quite frankly it’s frustrating! There is much more to learn. It’s a matter of tweaking what you already know so your fairy garden hobby can be satisfying and creative to keep you engaged all throughout the year.

Because hobbies should be enjoyed all year, shouldn’t they?

Join me and thousands of like-minded miniature gardeners for updates to this new adventure through our Mini Garden Gazette newsletter. It’s delivered to your inbox almost every week. Click in here, fill out the form and confirm via email and look forward to your next Gazette. There is no one doing what we’re doing, even in the fairy garden!